She'll be Alright, my textbook on elder safeguarding 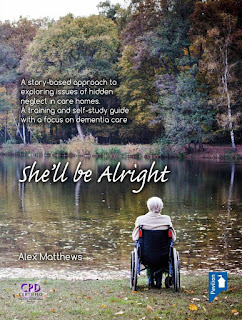 She'll be Alright: a story-based approach to exploring issues of hidden neglect in care homes.
A training and self-study guide with a focus on dementia care.

For high-res images, to arrange an interview or to review a copy of the publication, please contact georgia.smith@pavpub.com or 01273 434972


Biography and contact info
Alex Matthews has worked as a teacher since 1997. Having read Linguistics at Southampton University, his first specialism is teaching English as a Foreign Language, but Alex is currently (as of 2017) training to become a care manager and doing research into alternatives to the current elderly care model in the UK.
Alex can be contacted directly by email: alexmatthewscare@yahoo.co.uk, or through the book publishers: info@pavpub.com.

Press release
She'll Be Alright uses chilling case studies from real life in order to describe and explain exactly how hidden abuse happens. Hidden abuse is a particular type of abuse that leaves no scars but can cause death. Action on Elder Abuse claims up to 800,000 elderly people are subjected to abuse in the UK each year. Elder abuse is being allowed to happen right now in one of the richest countries on Earth. She'll be Alright is a tool for training carers and managers, but the general public will also want to read this book in order to learn how to protect their elderly relatives from abuse.

The origins of abuse explained
-Underfunding in care: Underfunding and cost cutting lead to short staffing in care homes.
-Process of carers going rogue: Carers are pushed to their limits, they are overworked, stressed, and undergo a process of brutalisation where they find themselves engaging in acts of abuse towards the elderly and bullying towards co-workers.
-Institutionalisation: Short staffing means care home residents end up feeling isolated, abandoned, a burden, and soon enter a psychological decline resulting in deep depression, apathy, and dehumanisation.

Sample Q&A Section
-Why the book?
When Alex Matthews found himself in a sick working environment where bullying was supported by management and elder abuse was an everyday occurrence, he was at a loss as to how to react. Eventually, he reported the abuse and resigned from his job, but not without documenting the abuse first. The case studies in She'll be Alright are witness accounts of abuse in a care home under poor management.

-What are you trying to achieve?
She'll Be Alright is helping to prevent elder abuse. Alex Matthews hopes that raising awareness of elder abuse amongst professionals and the general public will add to the efforts already undertaken by organisations such as Action on Elder Abuse and Care UK.

-Future projects
Alex Matthews thinks that the current model of elderly care needs a sea change. A new model of care is likely the only way to stop elderly abuse. Alex hopes to be able to help create this new elderly care model.

Specific info
-What makes this book unique?
The first reaction to this book by a professional care trainer was “everyone should read this book”. She'll Be Alright lets you access a world only known to professional carers. In doing so, it uncovers the ugly face of massified care, the care offered our elderly by corporations and public healthcare providers who care more about ticking boxes than about making people's last days happy and meaningful.

-Why is the book different?
This book is so different from any other care book because it uncovers hidden abuse and it does so by showing the reader exactly what piece of legislation is being violated at every single abuse event. She'll be Alright shows very clearly what to watch out for in order to avoid hidden abuse.

-Is the focus different?
The case studies in She'll Be Alright are written in a literary storytelling style that reaches out directly to readers’ hearts. This book is unique in the way it approaches a clinical subject through accessible stories.

-Is the author different?
Alex Matthews is a foreign language teacher and writer with seventeen years working experience in Japan, Spain, Latin America and the UK. When he decided to change careers and start as a carer, he didn't expect to find abuse and bullying in the workplace. His viewpoint is that of a newcomer, an external agent who can have a fresh perspective on things. Alex was a newbie with world experience and a good command of the written language. This combination of elements is the reason for this unusually poignant book.

'I wish I had had a book like this when I was teaching'. E.H. (Retired Social Care lecturer).